Drawing a Portrait From The Classic “Egg” Shape 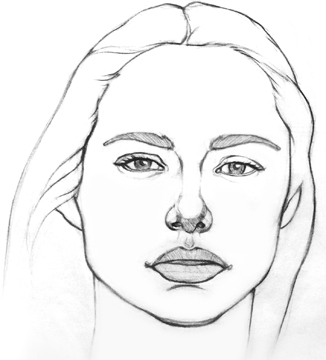 This is a continuation of last month’s art tip developing a portrait from an egg shape. Where we learned how to divide the oval based on eye spaces for a generic placement of the features. In this tip I will execute an actual portrait using the method.

Step 1
Starting with the Oval

Draw in an oval. Be careful to measure the proportion of how tall the head is to how wide using a pencil held in your hand and  extended at arms length use the tip of the pencil and your thumb to take proportional measurements. I forgot to do this and instead jumped right into the drawing and I had to go back and do some major revisions to my drawing that could have been avoided if I had taken more care. 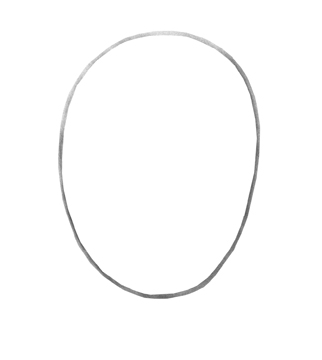 Step 2
Measure off the Eye, Nose and Mouth Lines

Establish a center line, 1/2 of the Oval for the eye line, 1/4 nose line and 1/8 mouth line. From there look for the small variances in the person’s features. Measure the features, everyone’s eyes, nose and mouth will vary being slightly longer or shorter than the standard proportions (example the nose is usually half way between the eyes and chin. Some people will have a nose slightly longer or shorter.)
Try to get as close as possible to that person’s unique proportions. Use your pencil and thumb to gauge accurate proportional measurements. After measuring the head I moved the chin line a little lower. I also reestablished the width of the head after observing the width of her head was about the same as the length from the bottom of her chin to her eyebrow. I then marked the eyebrow line. I then measured and marked where the forehead ended. The distance from brow to forehead was the same as from the chin to nose.

Check the following relationships and measure them (remember these are proportional measurements. Using pencil and thumb.)
1. Eyes to the Chin
2. Eyes to the Top of the Head
3. Nose to eyes
4. Nose to chin
5. Head width across the eye line to chin to brow
6. Compare brow to hairline against nose to chin.
Mark off all the relationships you note while comparing these areas. 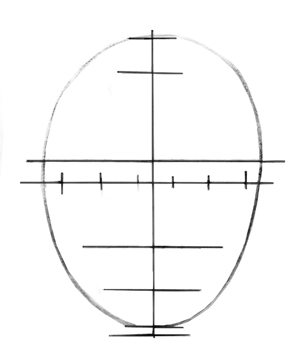 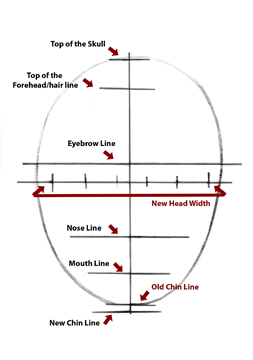 I begin to draw in the basic eyes, nose, mouth and eyebrows ( I will do detailed art tips on drawing the individual features later.) These basic shapes allow me to observe the basic relationships between the features and allows me to see what I may have missed and what needs to change. 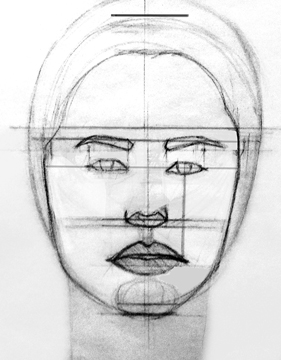 After all the remeasuring I saw a couple of needed changes. I noticed I made the head too long, her head needed to be a bit wider. The eyes were slightly too close together especially after widening the head so I moved the eyes(this is why I kept the features simple so changes would be much easier to make.) I redrew the nose, changed the mouth slightly, and redefined the shape of the hair as it defines the forehead. Below shows me in the process of making the changes I have listed. 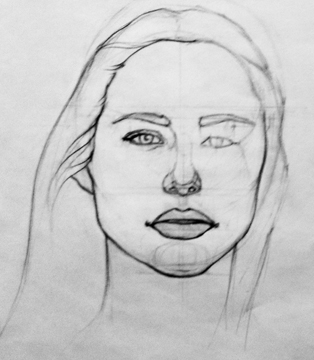 Special Notes
Taking it to the next level.

If I was to make this into a finished drawing there are still some modifications that need to be done. First I would redraw the eyes a little they are not symmetrical enough, same with the nose it too needs to be more symmetrical, and the lips again need to be more symmetrical. The features as they are were actually the way I drew them, but there are times you want to play those variances down and this is certainly one of those times. These modifications would strengthen the drawing’s consistency.

This site uses Akismet to reduce spam. Learn how your comment data is processed.

We use cookies to ensure that we give you the best experience on our website. If you continue to use this site we will assume that you are happy with it.Ok